Half vs Twin Ropes Explanation

It is easy to tell whether a rope is single, half or twin certified. The tape on the ends of a rope designated as safe for single use will have a number “1” in a circle. A half rope will have “1/2” in a circle, and a twin rope will show two interlocking circles, indicating that the ropes have to be clipped in together. (Photo: The bottom rope is dual certified as a half and twin rope. The middle rope is certified for half-rope use. And the upper rope is certified for use as a single, half and twin rope.)

Two ropes clipped to the same piece of protection will yield a higher impact force than if just one side of the half/twin rope is clipped. This is because two ropes simultaneously catching a fall will stretch less than one rope. For example, the maximum allowed impact force for a certified twin rope (two ropes clipped) is 12kN, compared to 8kN for a half rope (one rope clipped).

Caveat: The drop-test weight for a twin is 80 kg, while the weight for a half rope is only 55 kg, so the half with the lighter test weight will naturally have a lower tested impact force. Still, the fact that two ropes will stretch less than one remains true, as you can confirm by top-roping and lowering on a single half rope, and then on both ropes.

When your over-riding wish is to keep the impact force as low as possible, only clip one strand of a rope that is dual certified (half and twin) into your pro.

Due to the miracles of nylon engineering, some ropes now have two or even all three certifications. Such ropes will have multiple designations on the tape: A dual twin/half rope, for example, shows both the “1/2” in a circle and the two interlocking circles.

Dual designation isn’t a gimmick. Having ropes that can be doubled up (twin) or clipped alternately (half) to gear is an answered prayer for ice, alpine, mountaineering and old-school trad climbing. When a pitch wanders, you can alternate clips between the two ropes to minimize rope drag. If the pitch is straight, simply clip both ropes to every piece. 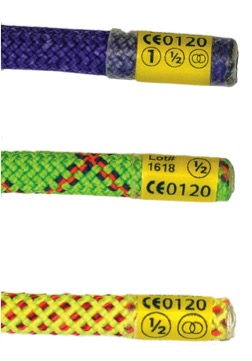 Another advantage to dual-certified ropes is that you can mix up how you use them even on the same pitch. In sections where the climbing is straight, you can clip both ropes, and when the route zags, you can alternate clips.

There is argument about whether you should clip both twin ropes to the same carabiner. One school says that two ropes clipped and rubbing together might melt one another. The other side notes that twin ropes are drop tested while clipped to the same carabiner, that their manufacturers recommend using them in this manner, and that beyond the armchair this isn’t a real concern. Last, there’s the practical side. If you do clip your ropes separately, you will use twice the number of carabiners or draws per piece.